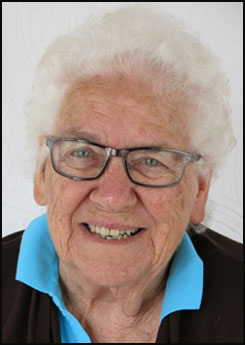 I was born in East Chicago, Indiana on January 20, 1931. My family hunted, fished and enjoyed picking everything outdoors. My Dad gave me my first gun when I was 5 years old. It was a Savage 22 rifle that was used by the NRA to teach men how to shoot in the first world war. I have two clips that say NRA , and still have this gun. I graduated from Roosevelt High School in 1948. Our Botany teacher took interested students with him to the Indian Dunes State Park on the shore of Lake Michigan where he was studying plants for his MS. After graduating I worked as a florist, operating a shop in Gary, Indiana. I lived with my sister who was married to Tony Zale, the boxer. Yes, I was able to attend the Graziano fight in Chicago where they called a TKO and should not have because Tony won. The powers that be simply wanted another fight, which Tony also won. Since my Dad owned the Indian Lake Resort near Eagle River, spent my summers with him fishing, picking berries, and helping him.

Then, onto Madison to the University of Wisconsin where I completed my BS as well as my MS in geology. While there I joined the Hoofers Outing Club. We traveled to the e Grand Canyon, hiking down to the Havasupi Indian Village. 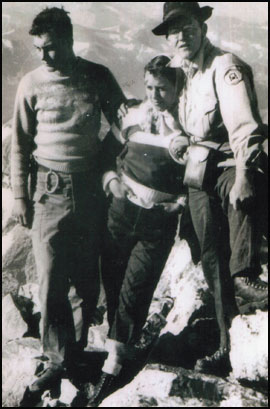 Gen summiting the Grand Teton
1950
That summer we went to Yellowstone and the Tetons. On August 30, 1950, five of us climbed the Grand Teton, with a 120 foot free repel on the way down. The next summer our required field work for our geology studies was in the Canadian Rockies. Imagine looking at the Blastoids, staring up at you at about 10,000 feet from the sedimentary rock that was once at the ocean bottom.

While working towards my degree, I became curator of the Geology Museum. Because of all the fore mentioned I became the first female naturalist at Teton National Park in 1954.

That year I met Bill Bancroft in 1950 Physics Class. We were married and honeymooned by flying his two seat Commonwealth airplane to Mexico landing on the west coast to camp.

One of the McKenzie residents


In 1972 1 went to work for the DNR at the McKenzie Environmental Center where I was assistant manager then manager until 1986. I also ran the 34 acre DNR exhibit at the Wisconsin State Fair grounds. I also served on the State Scientific Board, at MEC. We belonged to the Wisconsin Zoo Association and the AAZPG for the purpose of finding homes for the many extra animals that came to the MEC as well as to help educate others of the DNR management of our natural resources. While at the MEC I was appointed to the MATC Board making me the first female board member. While I served on the board we went through the process of building a new school and campus at Truax field. I was also teaching junior high school during this time.
After our air trip around the world, I traveled to the Poyang Lake and Wuchow areas of China with the International Crane Foundation to study cranes.

Upon leaving the McKenzie Center, I went to the DNR central office in Madison to work for Stan Druckenmiller in a Citizen Participation process regarding the proposed Exxon Mine in Crandon.


My family moved to our farm in 1969. Bill worked with his Dad and brother who owned Pumps and Equipment Inc., a wholesale plumbing business. He also operated our 120 acre farm raising cattle and crops.

The Bancroft Ranch in Poynette complete with airstrip. 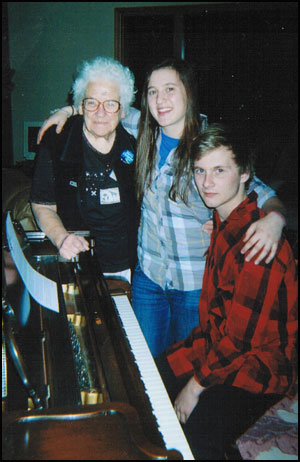 The Grandchildren
We have two daughters Ann and Sara. Ann worked at wholesale jobs in the Cayman Islands and Florida.

When she returned home she ran the lunch program at the Arlington Elementary School. Sara graduated from Stout University in the Restaurant and Recreation program. After graduation she worked for the Hyatt Lake Tahoe in Nevada. There she met her husband Paul who was the executive chef at the Hotel.

They were transferred to the Hyatt towers in Chicago for some years and then back to Wisconsin, where they owned the Sand Hill Inn in Merrimac. Paul is now in charge of the Culinary Program at MATC.

They have our grandchildren Dawson who will graduate from Chatum University in Pittsburg this year with a degree in Environmental Issues, and William who is at Madison College acquiring credits to transfer to the University of Wisconsin. Both Dawson and William are musicians and hockey players. Both grandchildren spent many weekends at our farm growing up where we enjoyed the Wisconsin River and the vast outdoors.

When Bill retired we built a home in Arizona for the winters. Our home there was located in an air park so we could fly from our strip at the farm to Aguila, Az.


Bill also flew for Wings of Hope, a single engine Cessna into Africa for an organization that gave medical assistance to people in the bush, and one to Australia that went up to New Guinea. I took both grandchildren and their mother Sara to Africa to meet Bill. There, we toured, saw the animals, natives and the Rift Valley, then onto Mombassu on the Indian Ocean. Then we all flew home on the airline.

The FAA came from Washington DC four days before Bill's death to present him with the Wright Brothers Master Pilot Award for 50 plus years of safe and extraordinary flying.

I now live on and operate our 120 acre farm, growing grasses for hay and pasture. I hope to set up for rotational grazing in thhe future. 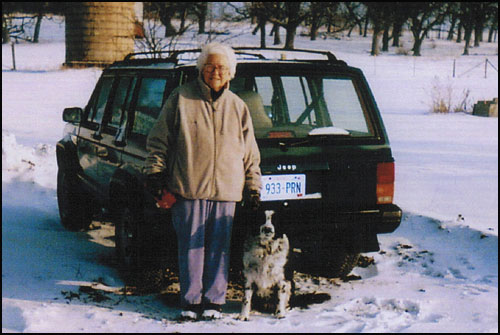 Gen and Spencer on the farm.

I have adopted a nice dog I named Spencer from the Baraboo Humane Society. I still hunt deer, but have not seen one on the farm during hunting season in two years.

Ann, who recently got married, has a home in Arlington.

Sara and Paul have moved in with me and pretty much take care of all the chores. Sara has horses and has gotten into jumping again. The grandchildren will be home this summer which gives me no reason to be lonely again. 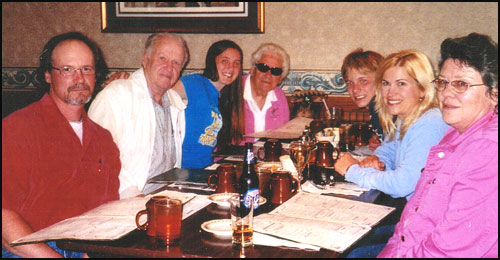