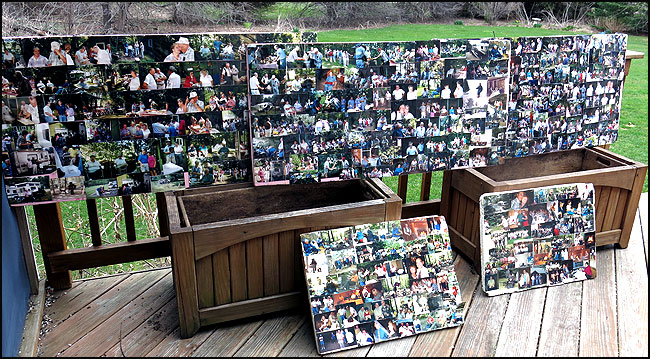 Several years ago Gerrie Martini gave me several panels her late husband, Bill, had constructed using rigid insulation panels with photos from the Fire Family activities attached. She thought they should reside in the ARC archives for posterities' sake. I agreed and in fact said that during one of our long southern Wisconsin winters I would convert them to a digital format.

They remained in the secure, ARC climate-controlled, lock-up vault, until this year when I took on the project. Below, in two albums, are the results of that effort.

What was the Fire Family all about . . . let's turn to WDNR Division of Forestry's official historian, Jim Miller:

"In a winter back in the 1970s it was decided we should get the fire people and their families together for a weekend of fun and relaxation. Reservations were made at the then Holiday Inn, now the Plaza, and the name Fire Family was used. Nubbs Galecke and I stopped into the site to firm up the details when we found out they thought we were a part of a statewide volunteer fire department meeting! We weren't and there was no room at the Inn. Nubbs went back to the Cutlass Motor Lodge in Antigo and reserved rooms for the weekend, as planned, and the word went out about the location change. It was a success and the decision was made we needed more of these assemblies and they should be expanded to include summer camp outs. Through the years the winter Fire Family meetings were held in Antigo, Wausau, Stevens Point, Oshkosh, Green Bay and Wisconsin Rapids and possibly some other places lost in the shadows of an aging memory.

Yearly camp outs were held at various locations in the Northern Highland-American Legion State Forest, Wood County and some other properties that provided facilities for group camping. One of the highlights of the summer gatherings was the roasting of a pig on Friday night and Saturday for Saturday night's meal. The other "big" event was the nightly song fests around the camp fire. Many of our members could carry a tune and a few of us that couldn't "lead" the singing by reciting the words for the singers, e.g., "On Top of Old Smokey". Myron Ostrowski played the accordion at both the summer and winter events. Another instrument that showed up was the "stump fiddle" which was a combination bell, pie tin drum, notched wooden staff that was played by sliding a drum stick up and down in time with the music. At the same time the player would pick the instrument up and slam it down on its' rubber end so the hanging noise makers, e.g., bells, would make noise. There also was a worn out table saw blade fixed so the player could make noise by beating it with a drum stick. At the peak, there were two of these unique musical instruments.

As time passed so did the families and their interests in the winter and summer get together. Bill and Gerrie Martini held some one afternoon gatherings that were called "Fire Family" but in an abbreviated manner. Instead of a pig roast Bill roasted ham, potatoes and some other goodies in a garbage can. It was one used just for this purpose and involved putting several open cans of beer on the bottom and placing the food just above the beer and then putting the can, with the food and the can cover in place, on top of a good fire and letting it "beer steam" cook all afternoon.

Like its members, the Fire Family also aged and eventually faded into a piece of Forest Protection History."