"My name is Dean Tvedt. I retired in 1987 after 37 years with the Dept. of Natural Resources. I would like to tell you about a person who, I hope, you will remember each time you cash your pension check. Perhaps some of you have heard about this person, a former state employee by name of Ingaborg Sidwell. I had never met her but I had heard a lot about her. But all the information I have about her comes from family correspondence and newspaper accounts.

Born in 1864, Ingaborg Halverson was the daughter of an immigrant family from Norway. They settled in southwestern Dane County near the small town of Forward. Here she grew up having to pitch loads


of hay, milk cows and all the other tasks of farming requiring lots of hard labor so typical of those times.

In 1893, Ingaborg married George Sidwell and they had one son. George, her husband, died two years later leaving her to raise their son alone. She had many different jobs, mostly cleaning jobs. At one time she worked at five jobs at once, in order to make ends meet. According to an article written by John B. Chappell, editor of the Ashland Daily Press, it states, "Housework and other cleaning jobs followed after her husband's death. She cleaned rooms at the Cardinal Hotel and the Lorraine Hotel in the morning, took care of children and took in ironing in the afternoon and in the evening from 5 to 9 she cleaned everything from the basement to the fifth floor in the Capitol".

She managed to keep up the mortage payments on her house, but the bank crash of 1929 took all of her other savings. She recovered $10 over a ten period.

She worked on, even though she was in her late seventies. The state employees had no pension plan at that time and she had to work to survive. There was a feeling in the administration, "That folks who worked for the state did not need a pension, for if they saved their money they would have plenty".

The years crept by, and she continued to work. Seventy-five, seventy-six, seven, eight, nine. Some of the people with whom she associated in cleaning the capitol building had passed on, but many who were still working needed a pension as badly as she.

In 1943, the legislature passed a pension bill, but Governor Goodland vetoed it to the disappointment of Ingaborg and her co-workers, and to countless others, no doubt. She decided she was going to talk to the Governor about it.

She made an appointment to see him and that morning she prayed that God would put the right words in her mouth. She went to see him and at first he said "no", but she went on to tell him it was not just for her but many others like her. She told him about an elderly lady who had high blood pressure and couldn't work anymore, another lady in the hospital and another who fainted when she heard of the veto. "It's not just me alone. It's the pension we all need", she said. The governor took another look at the state's financial situation and decided to reverse his position, asking the legislature to override his own veto and pass the "pension bill".

The legislature passed it and the Governor made national news by requesting the legislature to override his own veto. According to John Chappell's article, if you were to ask Mrs. Sidwell who was responsible for the governor's action she would say it was God.

Sidwell was my grandaunt, that is, my grandmother's sister. Through the efforts of one of my aunts, Minerva Morhoff, her picture and a caption noting her achievements now hang in the public reception area of the Department of Employee Trust Funds.

We, in our Madison area group of retirees, known as the Assoc. of Retired Conservationists, now dedicate our meeting in May each year to her. Perhaps other groups around the state will do something to commemorate her in some way, too. Ingaborg Sidwell retired at the age of 79 after 23 years of state service. Her retirement check was $14.70. She died at the age of 84." 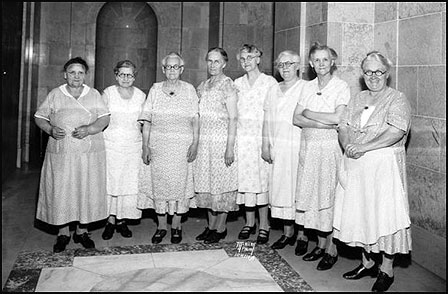 
 For the moment, the National Rifle Association's drive to overturn Gov. Jim Doyle's decision against carrying concealed weapons is the biggest veto story in town.

Important, yes. But whatever the outcome, it won't be remembered decades later, like the time a 78-year-old Capitol scrub woman named Ingeborg Sidwell changed a Wisconsin governor's mind. That made national news.

In 1943 America was at war, and the veto message from acting Gov. Walter Goodland said Wisconsin simply couldn't afford a pension program for state workers.

"If these were normal times, I would be glad to approve the bill," wrote Goodland, who cited new revenue estimates that confirmed his conviction that "the state cannot and should not expend any moneys not absolutely necessary for the attainment of our objective in this emergency."

"The state has existed many years without pensions. In times like these, when our very national existence is at stake," Goodland continued, "otherwise desirable benefits, not essential to the winning of the war, can and should in my judgment be withheld until peace and stability are here again."

The idea of a pension system for state workers had been discussed in the Legislature for 34 years, but it gained steam after the federal government adopted the Social Security program.

Goodland, the lieutenant governor-elect, become acting governor because Gov.-elect Orland Loomis, a Progressive, had died before taking the oath of office.

Goodland noted that "many persons who had retired because of age before the emergency have returned to work on farms, in the shops and in defense plants in order to permit younger persons to serve in the armed services.

"I do not believe that any person in state service will object to serving his state and country until this emergency is over, especially when such service will relieve younger men for duty in the armed services."

Sidwell, who had scrubbed the Capitol floors for 23 years, went directly to Goodland and told the governor she was getting too old to continue the job. She reminded the governor that food and medical care were expensive.

Sidwell told the governor it wasn't true that employees like her could save much money. She said she scrimped to save, but had lost her savings when banks crashed in 1929.

When Goodland vetoed the pension bill, Sidwell decided to go to the governor directly. She later told her story to the Ashland Daily Press:

"The girl at the desk was awfully nice. She talked with me and wanted me to see the governor. She said the governor had done so many things that are good, she was sure he would listen. But I was late that day; the governor had gone."

"So I went the next day before 9am.This time I was brought in to see Mr. Brecke, the governor's secretary. Pretty soon the governor came in."

"He talked with me and asked me about my visit. I told him what I had heard, and I told him about the banks where my money was and how old people had been affected through no fault of their own. He said he was going to do something for me."

"I said I had gone to a lawyer about my money in the banks. I said, Governor, 'You are a lawyer. Can't they do anything to help us?' "

Goodland, himself 81 at the time, changed his mind. He first talked about having the bill amended, something that was impossible after it had been vetoed. Five days after he had sent the original veto message, he wrote to the Legislature asking for them to override the veto. Lawmakers quickly complied.

Wisconsin became the 17th state to create a pension program for state workers. 

From the Wisconsin Blue Book:

On May 19, 1943 the Governor submitted the following communication to the senate.

The Honorable, The Senate, Capitol.
Gentlemen:

This morning I directed a communication to the Senate requesting that Bill No. 1210 S., be returned to me in order that I might approve it. My principal object in communicating with you was to indicate that I desired to see the bill become law. I had not given a great deal of consideration to the question of how that purpose should be accomplished and I assumed that it would be entirely proper for me to sign the bill if it were returned. However, upon further consideration I have some doubt as to whether the suggested procedure would be valid under the constitution and I think it is highly desirable that me should not proceed in such a way as would leave any doubt a to the validity of the bill's enactment into law.

I therefore suggest that the Senate and Assembly enact the bill over my veto. If it is so desired the Legislature may then return the bill to me and I will approve it and deposit it with the Secretary of State. My approval would not be necessary, but it would not detract from the action of the two houses, and I should like the opportunity to add my signature to what I think is a good law.


State contributions to the state retirement system started on July 1, 1943.